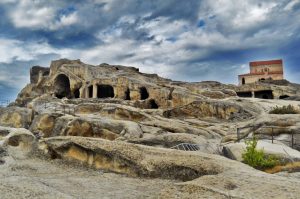 During this one day tour in Gori, we will visit the cave town in Georgia, Gori region, around 10 km to the east from Gori. Uplistsikhe is spectacular with its almost three thousand years history. It is believed that it was formed around the 1000 BC, and deserted only in the XIX century. The town of Gori is most famous, by Stalin’s birth place. At the heart of the city, among the old buildings, there is a bright spot standing – a huge palace in the original Gothic style. It is a home museum of Stalin, which is built in 50th of the past century. 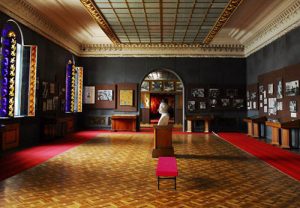 Museum is located next to the small house, where in December 21st of 1879 Stalin was born, in the family of shoemaker Visarion Jugashvili. House, which is build at the territory of the museum is a small rock building with the tall ceilings. In those years, the house was situated at the outskirts of Gori. The special exhibit – personal comfortable armored train wagon of Stalin with a luxurious interior of that time: Venetian glass mirrors, carved furniture.